Why was Corey Dickerson designated for assignment?

Was the question several of us were thinking when Tampa Bay made the move last Saturday.

The only reasonable explanation in getting rid of a guy who slashed .282/.325/.490 with 27 home runs a year ago is money. Dickerson was set to make nearly $6 million in 2018 and the cash/decent stadium/good ideas/fans-strapped Rays wanted to save some of that money.

Tampa Bay then went out and traded for the Angels' C.J. Cron, who makes far less ($2.3 million) than Dickerson and could take some of the DH days that would've gone to Dickerson, for a player to be named later.


While the money issue seems to be the motivation for the moves, I've come up with a handful of other potential reasons.

Dickerson went 0-for-4 with two strike outs & also grounded into a double play in a loss to the Angels.

3. Rays Fan Fest 2016 looked sparsely attended. The club no doubt blamed Dickerson, and to a lesser extent, his son. 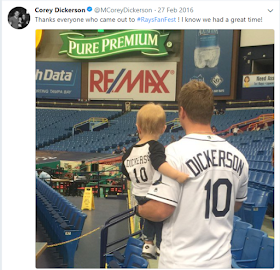 Dickerson went 2-for-3 with a pair of walks for Colorado in a loss to Atlanta on June 10, 2014. After being traded to the Rays before the 2016 season, he went 0-for-8 with five strike outs in two June 10th games. Tampa Bay wasn't willing to take a chance on another June 10th.

5. In 298 games with Tampa Bay, Dickerson never once volunteered to pinch run.

6. He wasn't the original Dickerson.

That honor belongs to Buttercup Dickerson, who played from 1878-1885 for a number of teams in three leagues - the NL, Union Association & American Association. Buttercup led the NL in triples with 14 in 1879; Corey has 20 CAREER triples. Buttercup was born in Tyaskin, Maryland; Corey's never even heard of Tyaskin, Maryland. I could go on and on and on and on, and I will in my forthcoming book From Buttercup to Corey: A Complete History of Guys With The Last Name Dickerson. 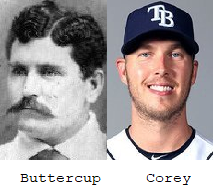