I was watching the first game of the Liberty-VCU series last Friday (Liberty won 5-4 thanks to home runs from Jonathan Embry and Tre Todd) and at one point play-by-play man Alan York started talking about great baseball names.

Sicnarf is a former milb.com name of the year recipient, and while that's fantastic it's also sad since apparently the last competition took place in 2014.

Anyway, back to Friday's broadcast, which included closed captioning for some reason. This is the text that came up on my screen during the Loopstok portion of the telecast: 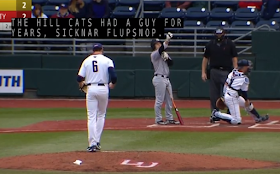 York pronounced it correctly, so missing the first name by a couple letters isn't too bad.

I can imagine a member of the Loopstok family tuning in for the first game of a mid-February, non-conference game between Liberty and VCU, hearing the name pronounced correctly by York.

"Isn't that nice, they mentioned Sicnarf."